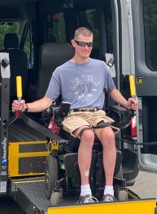 Life is precious. It can change in an instant which James experienced
first hand.

He had a very active childhood. Skiing, baseball, and running were just a few of the activities that he enjoyed.

James’ carefree life changed drastically during his teenage years when his health started to deteriorate. It became increasingly difficult to walk. After numerous tests, James was diagnosed with a neurological disease. Life was not easy and health complications became a constant challenge.

He spent months in a nursing home where he dreamed of living independently with people his own age. A glimmer of hope came when a friend told him about New Horizons Village.

Since moving to the Village,  James has cherished his own wheelchair accessible apartment, support services, and a community of friends.